The Median sales price in Kootenai county continued to climb in May to $559,000 a continued increase of 24.2% compared to last May according to the Coeur d’Alene Regional REALTORS®.  The number of homes sold slipped by 15.4% compared to one year ago however available inventory has started to improve. An increase in listings of 58.3% compared to last month is good news as the trend appears to be in place for continued increases in houses for sale, which could ease the competition for buyers. But homes are still selling fast and at higher prices than a year ago.  In May, the number of days between when a home was listed and closed in the MLS was 66 days.

Typically, May is the month with the highest number of new listings, according to Realtor.com. However, even with the uptick in inventory, buyers have just two homes to consider for every five homes that were available before the pandemic, according to Realtor.com’s analysis. “While climbing rates that cut into buyer ability to afford monthly payments are expected to ultimately dampen home price growth, we have not seen that yet,” said Danielle Hale Realtor.com Chief Economist. “Perhaps because despite slipping confidence, consumers widely believe that mortgage rate increases will continue, giving a strong reason to make a purchase sooner rather than later for those who want to buy within a relatively soon time frame.”

Real estate has been, and remains, the foundation of wealth building for the middle class and a critical link in the flow of goods, services, and income for millions of Americans. Accounting for nearly 17% of the GDP, real estate is clearly a major driver of the U.S. economy.

The National Association of REALTORS® calculated the total economic impact of real-estate-related industries on the state economy, as well as the expenditures that result from a single home sale, including aspects like home construction costs, real estate brokerage, mortgage lending, and title insurance. 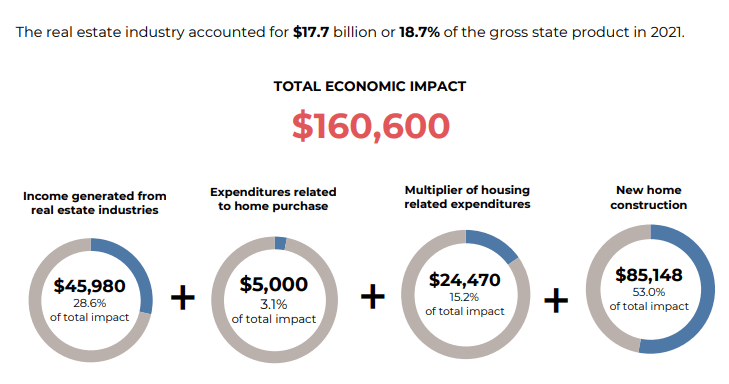